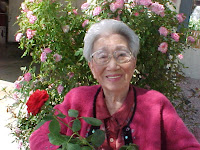 At the end of the odyssey that took me around the world, in search of love and enlightenment, I found both in the very place I grew up, in the form of a beautiful, petite Japanese American named Mary Burmeister. I spent 14 years studying with this living master of Jin Shin Jyutsu, the ancient Japanese healing art I have practiced for the past 33 years. Mary and the art of Jin Shin Jyutsu have been my pot of gold at the end of the rainbow. The last time I saw her I said, "There's not a day that passes that I don't think of you, with gratitude in my heart, for the life I've had because of Jin Shin."
Mary held out her hands. "Well," she responded, "God is the strength in my hands now. When He's 100% I'll be able to go home."
Mary returned home as peacefully as she lived on Jan. 27th, 2008, at the age of 89, leaving behind thousands of students and thousands more who have benefitted and been blessed by the healing graces of the precious art of Jin Shin Jyutsu.
Posted by Edible Odyssey at 8:27 AM No comments:

A Feast for the Senses 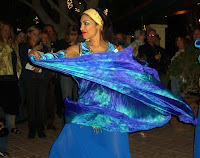 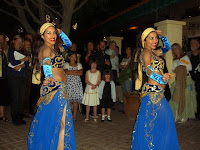 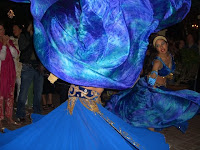 My culinary memoir SIREN'S FEAST got off to a tantalizing start when over 140 people showed up to celebrate the launch with me at Ca del Sole, a fabulous Mediterranean restaurant in Toluca Lake. One of my closest friends, Coco Conn, and my goddaughter Lauren Conn, helped me roll 400 stuffed grape leaves. Scrumptious paklava came from Oasis Bakery in Glendale, some of the best I've ever had, and Ca del Sole supplied the rest of the delicious cuisine. Guests were standing in line to have their Tarot cards and palms read and the place caught fire when Neena and Veena, the Belly Twins, performed. And yes, they are identical twins. Personally, I've never hugged so many people in one evening.

I'm blown away by the response to SIREN'S FEAST, AN EDIBLE ODYSSEY. People are already cooking the recipes and I've heard from several folks that they couldn't put the book down and have been ordering more copies for friends, in the words of one, "to share the delicious pleasure." It feels like a new odyssey is just beginning.
Posted by Edible Odyssey at 9:44 AM No comments: