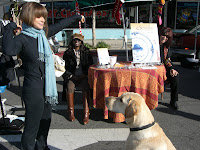 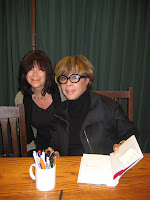 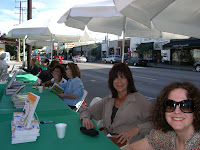 It's been hard to settle down enough to post anything lately. There was the book signing at The Cook's Library in West Hollywood with 9 LA food writers peddling their works on the street. The weather cooperated, thank goodness.


Then my friend Glenna Forster Jones arrived from London in time to help me peddle some more at the Studio City Farmer's Market. I've been on the street quite a lot lately and again, even though cold rain was predicted, it was clear and sunny. People don't usually come to a Farmer's Market to buy books but it worked out just fine. Another friend showed up with her 140 lb. lab Charlie who caught everyone's attention.

It's been a month for book signings. Pal Herman Leonard at Amoeba Records in Hollywood, then Diahann Carroll plugging her new memoir at Vroman's in Pasadena. When someone asked Diahann what her beauty secrets were she gave me a shout-out as her masseuse of many years. Diahann's new memoir, The Legs Are the Last To Go, is a great read. No more signings until next year. Have a wonderful holiday season everyone!
Posted by Edible Odyssey at 7:58 PM No comments:

When It Rains, Get Wet 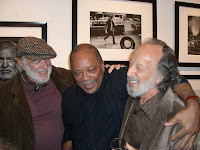 So Thursday night ( DEC. 4) I went to see my long-time ghetto buddy Quincy Jones at the book signing for his new fantastic coffee table book THE COMPLETE QUINCY JONES: MY JOURNEY AND PASSIONS: PHOTOS, LETTERS, MEMORIES AND MORE FROM Q'S PERSONAL COLLECTION. About 300 people showed up to hear Quincy in conversation with Don Heckman, noted jazz journalist and, generous as ever, Quincy stayed until midnight to sign books and greet fans. Needless to say, the book is out of this world and even interactive. You can pull his report card from the Schillinger School of Music out of its sleeve. Need I add that he got mostly all A's. Also among the amazing collection of memorabilia from one of the most exciting lives ever lived is the sheet music for We Are The World, with the signatures of everyone who participated, including the fingerprints of Ray Charles and Stevie Wonder and the lipstick kiss of Diana Ross. Check out Q's website http://www.quincyjones.com

I pulled a photo from my own memorabilia. Howard Hesseman, Quincy Jones and Herman Leonard--3 of my all time favorite guys. And guess what? They're all Pisces. Quincy's favorite quote and the path he has followed--"When it rains, get wet." Sage advice from the coolest dude on the planet.
Posted by Edible Odyssey at 9:16 AM No comments: