What a shame that another Los Angeles landmark bookstore is closing. I love Amazon as much as anyone, but nothing can compare to spending time in a brick and mortar bookstore, browsing the shelves, picking up books and chatting with the knowledgeable people who work there. So I was heartbroken yesterday when I read in the LA Times that one of my favorites, The Cook's Library in West Hollywood, will end its 20 year run the end of April. For cooks, chefs and foodies there was nothing like it. It was even listed in Gourmet magazine as one of the ten best best cookbook stores in the country.

Until April 30 their entire stock of cookbooks, including my own culinary memoir, will be on sale until all the merchandise has been sold. I visited yesterday and took along a plate of stuffed grape leaves and left with a fabulous Thai cookbook - Spirit House Thai Cooking.
Posted by Edible Odyssey at 4:10 PM 1 comment: 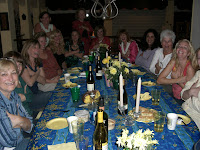 So I'm not the best photographer, but try fitting 15 enthusiastic women into one frame. The Bookie Club in Rancho Palos Verdes is a delightful group of accomplished women and I was thrilled to be invited to their gathering in an art and treasure-filled home overlooking the Pacific. I hardly minded the 2 hours spent on the 405 Freeway getting there since I was able to listen to our brilliant President's town hall meeting on route.

It seems like every gathering for Siren's Feast includes lots of delicious food and this was no exception. We had a scrumptious chicken tajine, couscous, cheese beorag, tabbouli, lemon squares and oh yes, lots of wine. I even gave a mini-demonstration of self-help Jin Shin Jyutsu. I could have stayed all night it was so much fun and I can't wait to see them again. They're called the Bookie Group because they usually play poker after their meetings.
Posted by Edible Odyssey at 8:38 AM No comments: